History of the Breed

Understanding their history to appreciate their temperment.

The Siberian Husky originated in Russia, where they were bred and raised by the Chukchi people for thousands of years. The Chukchi, a tribe of Siberian nomads, needed dogs that could provide fast, economical transportation over the vast frozen land. Unusually strong and agile, this medium size dog was able to swiftly cover long distances on a minimal amount of food. Known for their gentle nature, the Chukchi dog often served as a soft, furry beds for the tribal children, hence the phrase "three dog night", meaning it is so cold you would need three dogs in bed with you to keep warm.

Together the Chukchi people and the Siberian Husky dog developed a special relationship born of mutual need and nurtured by mutual respect. Together, they thrived in virtual isolation for centuries in the tundra before the outside world discovered and fell in love with this magnificent dog. Although the present-day Siberian Husky has changed since entering this country in the early 1900s, the breed still maintains many of the qualities that made the Chukchi sled dog such a prized possession. 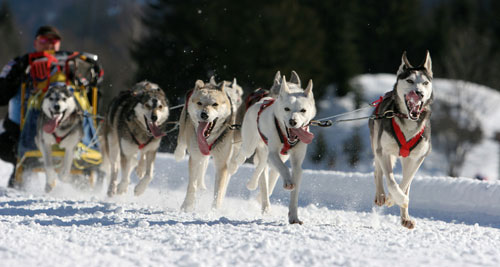 Introduction into the United States

The first known introduction of the Siberian Husky into the United States was to Alaska by a fur trader in 1908. Used for sledding, these dogs started winning Alaskan races almost immediately. The word was spreading about this superior strain of sled dog in Siberia.

The first team of Siberian Huskies made its appearance in the All Alaska Sweepstakes Race of 1909. Later that same year a large number of them were imported to Alaska by Charles Fox Maule Ramsay and his team, driven by John "Iron Man" Johnson, who won the grueling 408-mile race in 1910. For the next decade Siberian Huskies, particularly those bred and raced by Leonhard Seppala, captured most of the racing titles in Alaska, where the rugged terrain was ideally suited to the endurance capabilities of the breed. Leonhard Seppala became famous for his outstanding racing Siberians. One especially well-known lead dog of Seppala's was Togo. Togo was Seppala's full-time leader from about 1917 to 1925, although Seppala frequently used him as a lead dog even before 1917. Togo was the most famous and most traveled dog in Alaska, with many racing victories to his credit. He was scrappy, fast, and brilliant.

Togo played an instrumental role in saving many lives in an Alaskan village (Nome). In January 1925, doctors realized that a potentially deadly diphtheria epidemic was poised to sweep through Nome's young people. The only serum that could stop the outbreak was in Anchorage, nearly a thousand miles away. But the lone aircraft that could quickly deliver the medicine had been dismantled for the winter. In desperation, officials turned to a much lower-tech solution: moving the medicine by sled dog.

The serum was sent by rail from Anchorage to the train stop closest to the trail that led to Nome, which was Nenana. Yet, the distance from Nenana to Nome was still more than 670 miles, and the serum had to be transported across rough, potentially deadly terrain. More than 20 mushers took part, battling temperatures that rarely rose above 40 degrees below zero Fahrenheit and winds that sometimes blew strong enough to knock over sleds and dogs. Reporters brought news of the race to a world suddenly transfixed by the drama in the far north.

Leonhard Seppala's team, led by Togo, ran the longest and most dangerous leg of the relay -- 91 miles, including a treacherous stretch over the unpredictable ice of Norton Sound. Togo unerringly led his team into a 40-mph gale -- the wind chill was about 80 below zero -- on the way to the handoff to the next musher. In all, Togo and Seppala's team covered more than 260 miles, out from Nome and back, in the serum run.

Incredibly, just six days later, on February 2, 1925, Gunner Kaassen drove his heroic dog team into the streets of Nome. In the lead of his team was a husky named Balto, whose furry face soon became known around the world. A year later, in honor of the epic trek, admirers erected a statue of Balto in New York City's Central Park. The statue says:

Dedicated to the indomitable spirit of the sled dogs that relayed antitoxin six hundred miles over rough ice across treacherous waters through arctic blizzards from Nenana to the relief of stricken Nome in the Winter of 1925. Endurance, Fidelity, Intelligence.

Balto was suddenly a world-famous celebrity; for two years after the serum run, the dog and some of his teammates traversed the continental United States as part of a traveling show. After Balto died in 1933, his body was preserved and displayed at Cleveland's Natural History Museum. In 1995, a popular animated movie about Balto was released, adding to his fame.

Learn more about the Iditarod races